Australia is surrounded by approximately 11,000km of mangrove-lined coast, representing approximately 18% of the coastline. The Habitat that they form is rich in plant diversity and structural complexity, but this varies from place to place. Mangroves can be found in six states across Australia. 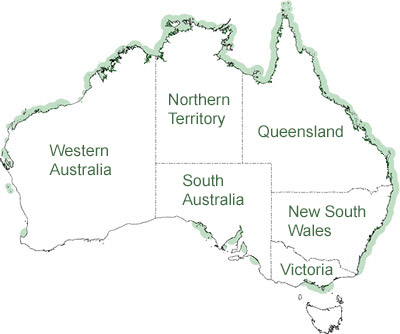 Characteristics of the Australian mangrove habitat include;

Avicennia marina dominates the temperate south coast, while Rhizophora species dominate the tropical north. Distributions of mangrove species are affected by climate, with most restricted to warmer wetter areas of the north.

Australia’s mangroves are largely low-impacted and protected by their isolation. They are rarely exploited directly and most occupy the least populated northern coast. There are however localised impacts and pressures around estuary ports, and with urban development associated with recent sea-change resettlement to coastal areas.

Australia has the third largest area of mangroves in the world after Indonesia and Brazil. Totalling around 11,500 km² representing approximately 6.4% of the world’s total mangrove area. The larger forested areas of Australia’s mangroves, approximately 75%, occur in the humid tropics to the north where human population densities are low. However, there are notable areas of mangroves in temperate regions as far south as Corner Inlet in Victoria at around 38° S. This is the most southerly and highest latitude site of mangroves in the world. These southern stands consist entirely of one species, Avicennia marina, a member of the plant family Avicenniaceae.

The Australian coastline although relatively lightly populated, compared with other large countries with mangroves, has over 85% of its population living within 50 km of the coast. This reflects the coastal lifestyle that is an integral part of the Australian identity. Furthermore, the trend to move to the coast continues, with all States and Territories reporting their highest population growth rates within 3 km of the coast.

Bring understanding and knowledge to your neck of the Mangrove woods!

One of the emerging great challenges of the 21st century is the need to mitigate current environmental damage and disturbance, while addressing the growing threats to diminishing natural habitats like Australia’s amazing mangroves.

Australia’s mangroves, like never before are facing the challenge of a rapidly changing, dynamic world. Implicit in this, and in consideration of the factors that influence mangrove diversity and growth, is how these growth limitations ultimately define the vulnerability of each species to changes taking place within the unique natural environment of mangroves.